The purpose of NOAH's Uranium Group is to provide information on the nuclear fuel chain, including the environmental, energy, foreign and security policy consequences of uranium extraction, processing, transport and trade, as well as nuclear waste disposal.

All the entries in the list below are in English.
They can also be found on our Danish page together with a large number of entries in Danish.

NOAH's Uranium Group aims at educational and information activities in Greenland and Denmark in order to help reintroducing Greenlandic uranium-zero tolerance. The group actively engages members and networks in both places.

Press release: The Kvanefjeld Mining Project And Other Uranium Projects Should Be Stopped (27 September 2021)

Uranium and Rare Earth Elements in Greenland – Past and Present (article in Nuclear Monitor #891, April 2021)

141 NGOs call for a moratorium on large-scale mining and oil and gas extraction in Greenland (Press release, 10 February 2021)

International support for the zero-tolerance-politics on uranium (26. april 2013)

Rare earth elements can be extracted in Greenland without uranium (11. marts 2013)

NOAH's Uranium Group has been engaged in the ongoing process of finding a repository for the Danish nuclear waste in recognition that the final waste concept for the long-term radioactive waste was not appropriate.

16 October 2017: Government proposal on nuclear waste disposal is a victory for the environment

30 October 2015: The Danish nuclear waste management process must be improved - Feature-article in Ingeniøren

3. november 2014: Journey to the Safest Place on Earth

Short chronology of the Danish decision-making process for the future management of nuclear waste (fra 13. marts 2003 til 3. juli 2014)

NOAH's Uranium Group engages in European energy policy, focusing on the abolition or reform of the EURATOM Treaty and the promotion of renewable energy and energy efficiency.

22 December 2016: The new EU energy package is not sufficient

NOAH's Uranium Group was established 7 May 2014. The group is set to continue the cooperation between NOAH's Energy and Climate Group and SustainableEnergy, The Danish Ecocouncil, Avataq (Greenland) and Urani Naamik (No to Uranium/Nuclear Power)

The Uranium Group is also in other ways the successor to the work done by NOAH's Energy and Climate Group on nuclear issues in the previous decades.

Members of the group as of February 2021 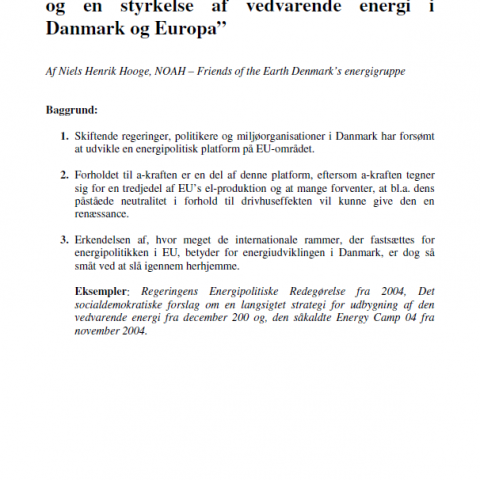