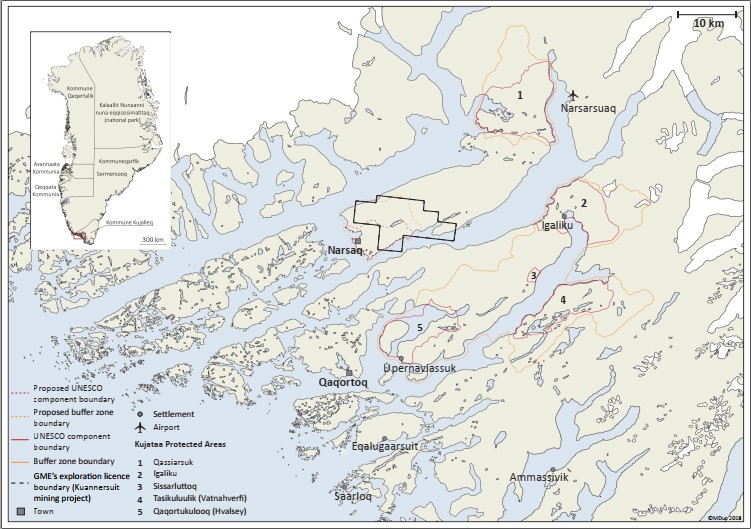 The UNESCO world heritage site at Kujataa [1] is located too close to the uranium/REE mining project at Kvanefjeld and should be put on the World Heritage Convention’s danger list until all plans for mining at Kvanefjeld are abandoned. At the same time, it should be extended to include new sites in and around Narsaq and even Kvanefjeld itself or parts thereof that have as much cultural and natural value as the already designated site.

On March 13th, Mariane Paviasen and Kirsten Egede Larsen proposed on behalf of URANI NAAMIK in Narsaq that the UNESCO world heritage site at Kujataa should be extended to include parts of Narsaq and Kvanefjeld. These should be entered into Greenland’s World Heritage Tentative List. Kujataa is one of three world heritage sites in Greenland. In submitting the proposal, URANI NAAMIK responded to a call for submissions by Greenland’s Ministry of Education, Culture, Research and Church and the Danish Ministry of Culture’s Agency for Culture and Palaces.

”You have to ask yourself, why Landnamsgaarden and Dyrnæs Church at Narsap Ilua plus other sites near Narsaq that have played an important role in the development of Greenland’s farming culture, haven’t already been granted world heritage status”, says Mariane Paviasen, Chairwoman of URANI NAAMIK in Narsaq. “The same goes for Kvanefjeld itself, which is unique because of its variety of rare minerals. It is difficult to see how these places differ from the five already designated sites at Kujataa”. [2]

”Recently, Narsaq Museum’s curator recommended that Landnamsgaarden and Dyrnæs Church should be recognised as world heritage. We call on everybody, including Kujalleq  Municipality,  who take an interest in protection of cultural and natural heritage to support the efforts to get these sites at Narsaq on Greenland’s World Heritage Tentative List”, says Kirsten Egede Larsen from URANI NAAMIK. “In particular, we call on the archaeological community to get them evaluated as thoroughly and quickly as possible. With a new pro-uranium government in power, there is a risk that mining could begin at Kvanefjeld very soon. This would cause irreparable damage to this unique heritage”. [3]

The reason that the sites at Kujataa are not already on the World Heritage Convention’s danger list could be that the Kujataa management group believes that they will not be impacted by dust deposition by mining at Kvanefjeld, although their unique farming traditions have been a determining factor in designating them as world heritage. Risø National Laboratory has estimated that up to a thousand tons of radioactive dust might be released annually from the open pit mine. A lot of it will be carried by heavy arctic sea winds towards Narsaq and across the region, where it will affect among others agricultural activities [4].

“Mining at Kvanefjeld will make agriculture very dangerous not only near Narsaq, but also at Kujataa”, says Niels Henrik Hooge from NOAH Friends of the Earth Denmark’s Uranium Group. “When the mining company that owns Kvanefjeld tried to prevent the Greenlandic and Danish press and a group of NGOs from publishing the preliminary EIA report last year and the year before, it was clear that the mining project was not going to meet Greenland’s Mineral Resources Act’s environmental and climate requirements. How a huge open pit mine located on a mountain top at almost one kilometre’s altitude could avoid substantial radioactive dust emissions is very difficult to understand”. [5]

Detailed map of Landnamsgaarden, based on Kapel, 1994.The farmstead was founded around 1000 AD, consisting of stables, a banqueting hall and a sleeping area: https://noah.dk/sites/default/files/inline-files/Map%20Landnamsgaarden.pdf

See the additional comments to the maps by Marine Duc: https://noah.dk/sites/default/files/inline-files/Additional%20comments%20Narsaq%20UNESCO%20%20proposal%20zone_0.pdf

The big Northener Farm in Narsaq is also mentioned as a possible world heritage site in a letter from Greenland National Museum and Archive of April 24th2018 to URANI NAAMIK in Narsaq.

[3] The proposed sites generally meet a wide range of selection criteria for nomination to the World Heritage Tentative List. With respect to Kvanefjeld and the Ilimmaasaq Complex with their more than 200 different minerals, mainly criteria 7 and 8 are relevant. See UNESCO World Heritage Convention homepage: https://whc.unesco.org/en/criteria/