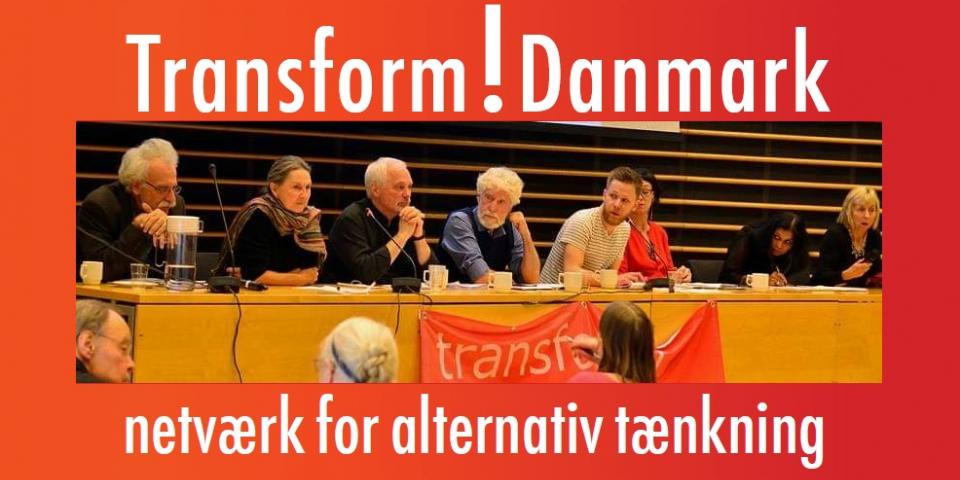 “How to Combat Climate Warming – Green Capitalism or system change?“

The industrial and economic slowdown due to the pandemic is no substitute for sustained climate action. How to achieve concrete and more ambitious goals in climate and environmental policies? Are the measures and goals adopted by the EU, governments and institutions much more than a greening of Capitalism ? And how much can be achieved by green Capitalism/green growth seen on the background of the real challenges of climate warming ? Climate action should be part of the recovery programmes, but are they being absorbed by neo liberal policies?

The conference will be in English.

Depending on the circumstances surrounding Covid-19, the conference may take place on Zoom or be a Zoom/physical conference. If there are no restrictions, it will only take place at the venue.

Organizers:  Transform!Danmark - in cooperation with transform!europe, and Enhedslisten/Red-Green Alliance, Global Aktion, NOAH – Friends of the Earth, Solidaritet, Kritisk Revy, and others

10:15-10:55  Walden Bello, Professor, State University of New York at Binghamton; co-founder of and senior analyst at the Bangkok-based institute Focus on the Global South; recipient of the Right Livelihood Award (aka Alternative Nobel Prize) in 2003; and author of 25 books, among which are Deglobalization: Ideas for a New World Economy (2000), Counterrevolution: The Global Rise of the Far Right (2019), and Paper Dragons: China and the Next Crash (2019).

The presentation will locate the climate emergency in the deep crisis of legitimacy of neoliberalism and globalization owing to the stunning spread of Covid 19 occurring at a time when the world was still mired in the aftermath of the global financial crisis of 2008.  Covid 19 put an end to “connectivity,” a new phase of globalization led by China, and created conditions for deglobalized production that would be less harmful to the climate.  However, such potentially positive economic conditions have not been accompanied by positive trends at the level of politics, where the dominant fact is the rise of the far right both in the global North and the global South.  The presentation will examine the far-reaching implications of the meshing of the crisis of the climate, the crisis of neoliberalism, and the rise of the far right, with a view towards arming progressives with ideas and strategies to confront this conjunction of global trends.

As the world approaches one more deadline for climate action by 2030, we are also faced with a sum of many crises: economic, ecological, sanitary and humanitarian. This requires urgent action, but, despite many signs of insurgency and resistance across the globe, billionaires continue to get wealthier and capitalism reinvents itself in a mix of old and new 'normals'. This scenario calls for building mass movements that are radical in their objectives, but that also know that if climate action is not successful in the near future, there might not be the necessary conditions and time to accomplish larger revolutionary goals. This presentation looks into efforts in the Global South to build the connections between struggles in order to avoid the worst of climate change and links it to wider debates of carbon transition and worldwide solidarity between and with the oppressed peoples.

13:30-16:00: Parallel sessions on 1) Green Capitalism or system change – EU Green Deal and Recovery plan – the roles and impact of national climate policies and the climate/environmental movement, and 2) The need for systemic alternatives and how to build them?

“How compatible is the European Green Deal with trade agreements?”

The European Commission is about to present the result of its review of the Union’s Trade Policy, following a long public consultation process. Will trade policy become coherent with the Green Deal, or continue to serve the old priorities?

Over the past two decades, the European Commission has been negotiating Free Trade Agreements with many countries and regions. FTAs with 76 countries have already been concluded. The success of these agreements is usually measured by calculating growth rates of the gross national product in Europe and the increase in exports and profits of large companies. This growth occurs at the expense of 800 million people who are left behind starving, and also at the expense of climate and environment. Instead of furthering the greed for profit, the realization of the 2030 Agenda for Sustainable Development must replace the original logic of free trade and has to be the new benchmark for policy success.

The Danish climate law of 2019 is an ambitious set of policies, anchored in a firm legislative commitment. How has it held up to political realities since its adoption? What is the status quo on reaching the envisaged 70 per cent reduction of greenhouse gas emissions by 2030? How has the corona crisis impacted Danish climate and ecological policies? This talk will offer an overview and stock-taking of developments, framed against the background of power relations and political struggles.

Jacob Sørensen, NOAH – Friends of the Earth, researcher and activist, “Baltic Pipe – No thank you” campaign

As oil fields are emptied and technology improves it becomes more feasible to exploit fossil gas. Moreover, fossil gas emits less CO2 and particles than coal and transition from coal to gas can help achieving short term national climate and air pollution targets. Therefore, many new fossil gas infrastructure projects are being built all over the world at the moment. The EU’s fourth Projects of Common Interest (PCI) list - eligible for European public funds – contains, for example, 32 new fossil gas infrastructure projects. This has given rise to many local, national and international resistance networks.

In Denmark most resistance has been built up around the construction of the Baltic Pipe, which is planned to transport gas from Norwegian fossil gas fields through Denmark to Poland. The pipe will distribute three times the present Danish consumption of gas, and it will be a major setback in terms of making Poland compliant with the Paris agreement. Many different groups including affected locals, climate activists and politicians from all over the country are actively resisting its construction.

Session 3: The need for systemic alternatives and how to build them?

“Women and the climate crisis. Developing eco-feminism as a way to system change”

Partly conceptual, partly illustrated with historical and current concrete examples this session examines both eco-feminism and petro-masculininty as root causes to the climate crisis. Ecofeminism also offers an approach that eventually can alleviate the impact of our day-to-day practices, which subversively counteract the large-scale, established, ongoing climate deterioration.

”Priorities to move the transition in Europe forward”

“Systemic alternative” is a powerful notion; for us, it means that a radical eco-socialist transition plan is needed in Europe, as in the rest of the world. It also means that some sort of ‘rupture’ is needed in the daily operations of bourgeois society to achieve full decarbonisation, the key requirement to end climate change. This session will focus on a number of measures, to be taken at different levels, which are necessary to enable the transition: economic democracy and worker management, socialised banking, decommodification of nature, cooperation instead of competition, and balanced territorial development.

There may be changes to the timetable depending on the practical organization of the conference as a Zoom or Zoom/physical conference.